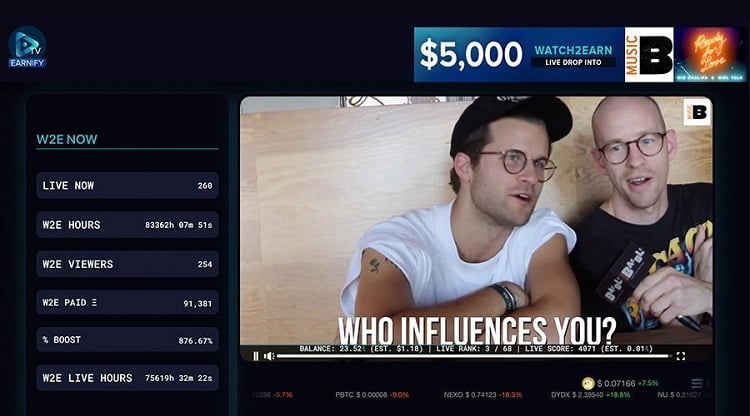 Edge Video promises to revolutionize the streaming experience. When streaming and content creation sites took to the internet, they gave an impression of a decentralized content flow. Streaming sites like YouTube advertised their free services. Viewers could watch their favourite shows and even become creators for free. Gradually, over time, however, the funding and structure for the creation and streaming of online content have been impacted by the industry’s expansion. “Free sites” are not as free as they would like their viewers to believe.

Such times have called for a reformatory streaming platform–one that does not depend on premium service fees to allow viewers to enjoy the complete experience.

Why is Edge Video the perfect option?

Utilizing user data, disclosing their personal information to outside parties, and making money from it is incompatible with the principles of a decentralized industry. Few people seem to be interested in adopting a balanced, consumer-centric strategy, which will result in a win-win situation for everyone (publishers and viewers). A future of centralization, data breaches, and privacy violations awaits us after this.

Perhaps it is not surprising that customers are looking for substitutes that respect their privacy and provide them with something in return for the time and effort they put into consuming information.

The problems that Edge Video promises to solve:

The main problems that Edge Video counters are the adverse effects of cookies and paywalls. Many users today have become victims of cookies, paywalls, and subscription charges when using streaming services. Online advertising has evolved into a funding strategy fraught with privacy concerns and geared more towards financial gains than viewer enjoyment—given priority by publishers, content producers, and media organizations.

Many viewers find sponsored commercials irritating, to say the least. Due to this agitation, viewers resort to using “ad-blocking” software. However, they deprive the publishers of the anticipated financial rewards and necessary funds when this occurs. Consequently, streaming services make the general assumption that all viewers might be privy to using ad-blockers. This assumption has led to a rise in the usage of cookies by digital publishers, producers, and artists that want to drastically boost reader revenue while utilizing the personalization capabilities of paywalls and subscriptions.

Edge Video is determined to fight the constrictive elements that restrictive access to entertainment brings. Subscriptions and paywalls create a system where high-quality information is only accessible to a small number of viewers who can afford it, leaving the majority of viewers with less desirable information. Services like Netflix, Disney+, Hulu, and HBO Max rely on monthly subscriptions to fund their ventures. This, however, makes their content exclusive, and the viewers who cannot afford an array of subscriptions are left with leftover material. In a decentralized ecosystem, however, the principle of exclusivity has no place. In an ideal web3 space, content would flow freely.

Here, publishers and content creators primarily monetize their work through digital advertising. Publishers sell advertisements in addition to paged content to pay for the creation and distribution of their art; third parties purchase some ad slots and fill them with graphics from advertising agencies and their clients. Through programmatic auction processes, this programmable process generates customized content in real-time, depending on the viewer’s data, rendering paywalls and subscription charges obsolete.

According to reports, the legal requirements for individual and national privacy are significantly outpacing the effectiveness of behavioral advertising channels that use cookies. As a result, viewers now employ ad-blocking software for a variety of reasons, including aesthetics, performance, and privacy. Every time a viewer chooses to watch something for free, they incur a debt that must be settled through a paywall or a subscription to premium material. Even if publishers rely solely on visitor traffic, ad earnings have decreased over the previous few years, and they are now in deficit. Paywalls and subscriptions are two innovations created to discriminate against viewers by utilizing them while also logging great financial gains. So far, these goals have so far been inconsistent for viewers and publishers.

The success of paywalls for new publishers is poor, compared to publishers with a huge audience and high-quality material. When monetary benefits are the main topic of conversation, it is challenging to engage in the game of satisfaction.

Why do traditional publishers fight so hard for subscriptions and paywalls?

Even tech giants have realized the strategic significance of advertisements, which have evolved into the business story of live streaming and visual content. Although global TV and major publishing companies may make similar end promises, all forms of media fundamentally follow the same workflow and are frequently more closely connected to cookies, paywalls, and subscriptions.

Where we come in:

Engineering and management were combined to create a decentralized live streaming platform, and Edge Video, the video player for the web3 ecosystem, is a reflection of this fact. The creation of Edge Video has been built on an understanding of paywalls and subscriptions. With its Watch2Earn functionality and decentralized CDN, the platform enables viewers to own an NFT of their favourite personality or celebrity while earning money for their viewing time.

Edge Video uses blockchain technology to give viewers control. Imagine having an NFT that grants entry to gated live performances, EDGE does just that. Edge Video creates options for live broadcasters and consumers of video content to earn money for their users. It sounds like a completely unreal promise, but Edge Video stands for all of that and more. This incredible journey with both ad-supported and premium content begins with the viewer’s Crypto Wallet.

Boredom Is Essential: How Unstructured Time Can Fuel Your Child’s Creativity

Top 6 Wireless Microphones For Your iPhone In 2022